The Difference Between CT and MRI Scans 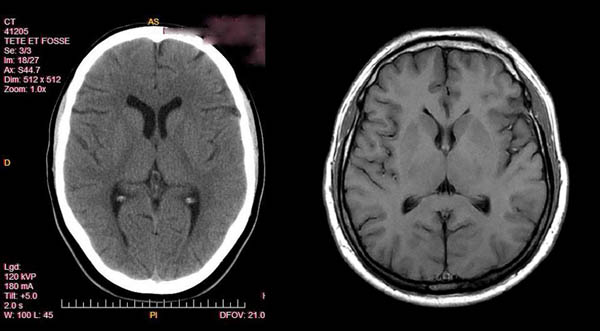 When I first began thinking about becoming a Radiographer, I was only vaguely aware of the differences between MRI and CT scans. Some people will have been examined using either of these techniques, but others may have only seen pictures, or seen 'examples' of scans on TV (e.g. on 'Holby City' and 'House'). Sure, on a first glance, they do look pretty similar in the detail and quality of their images, but that's where the similarity ends.

Let's start with CT scans, shall we?

CT
Computed Tomography scans are a specialised type of X-ray. CT scans take 360-degree images of internal organs, the spine, and vertebrae. They combine x-rays and a computer to produce a cross-sectional view of the body part being scanned. Sometimes, a contrast agent (usually an iodine-based substance which is absorbed by abnormal tissues) is injected into the blood to make structures more visible.

CT is very good for imaging bone structures and the spine, and they are used more frequently when diagnosing conditions affecting the vertebrae and other bone structures.

MRI
MRI, or (for those who don't know) Magnetic Resonance Imaging, on the other hand, is completely different! Unlike CT scans, MRI uses a powerful magnet, radio waves and a computer to produce images.

The way it works, is that the computer sends radio waves through your body and collects the signal that is emitted from the hydrogen atoms (the magnetic properties in your body's organ and tissue cells). The images produced do look similar to CT scans, but the detail in the soft tissues is higher.

An advantage of MRI is that the contrast of the image can be changed. Different contrast settings highlight different tissue types. Contrast agents are also used in MRI scans, but they are not iodine-based.

I hope this has given you a good, brief(ish) explanation regarding the differences between CT and MRI. If not, well.....It was interesting for me to find out, anyway!